This the third post in our series of posts about our ongoing major home renovation. I’ve already written about mindset and about the demolition process. We also received a guest post written by my contractor which we’ll publish in a couple of weeks. So what has been going on lately? Well, major grading has taken place, foundations have been laid, framing has been done, the roof has been put on, windows have been put in, and insulation has been replaced. But the last month or so of the project has been absolutely consumed by one thing more than anything else–making decisions.

Those of you who have built a house or done a major renovation know exactly what I’m talking about here. Everyone warns you about how many decisions you will have to make. I still severely underestimated it. Just to give you an idea of what I’m talking about, let me create a list just of what comes to mind in a couple of minutes as far as some of the decisions we’ve been asked to make in the last month: 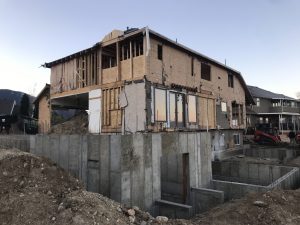 It just goes on and on and on and on and on. It was like a part-time job there for a while. Katie is doing 90% of it and I still spent 6 or 8 hours a week just making decisions and meeting with suppliers, the contractor, and subcontractors. It’s absolute insanity, especially when you start driving around town to look at other houses so you can see what all these things look like when they’re not on the showroom wall. For someone like me who dislikes shopping, it’s like a trip across the River Styx.

We were lucky, however, because one of us cared a lot more than the other. I talked to one of my partners about a very minor remodel compared to this one that they recently did. The contractor came over and the two spouses got into an argument about the color of the grout in a fireplace. The contractor eventually said, “You guys work it out, I’ll come back tomorrow.” And that was just one decision. Katie is much more interested in this process than I am. I would guess I don’t care about 90% of the decisions. So I’ve told her about the ones I care about and let her make all the other ones on her own. While that does create a lot of work and responsibility for her, it is far better than the alternative of us trying to make every decision together. So far, she’s only taken advantage of me once (she wanted a garage door with windows on it, she knew I didn’t, and she just ordered what she wanted), but mostly it’s worked out fine. Even the garage door I didn’t care that much about. 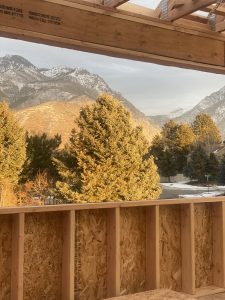 The View From the Recording Studio

Since Katie is the one doing all this work, I thought I better get her in on this post, so let’s go interview style!

WCI: Were you surprised by how many decisions there are involved in this process? What is the worst part of that?

Katie:   I knew there were a lot of decisions that had to be made but was surprised by the sheer number of them.  There are so many details that you take for granted and never really think about until you have to make a decision about them.   I was also surprised by how concentrated time-wise the decisions were.

WCI: Do you like the fact that your husband is letting/making you make most of the decisions?

Katie:  I don’t mind it as it is easier to coordinate meetings with the general contractor and the various subcontractors when not trying to add another schedule into the mix.  Jim also shops like a hunter which is to the shoot the first thing he sees and doesn’t want to look at the various options so I can take as long as I need to peruse stone slabs, tile, etc.  However, it takes a substantial amount of time and the pressure is on to make it all look good!

WCI: What have been the hardest decisions to make?

Katie: It’s hard trying to coordinate all the various elements in each room such as countertops, flooring, cabinets, furniture, lighting, etc when you’re picking them out at different locations and aren’t able to get samples for them all.   Sometimes it is hard to envision what a small sample of wood or tile will look like when it fills a room floor or wall.   Many hours have been spent scouring the internet for pictures and ideas.  Hopefully, it all works out when they are put together! 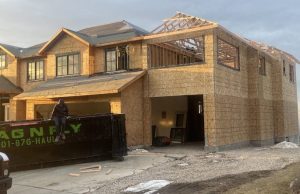 The boat garage below the new WCI office space, recording studio in front, Katie’s office in back

WCI: What is the biggest disagreement you have had so far on the decisions?

Katie: Whether the garage doors would have windows or not.

WCI: Have you gotten the kids involved at all with these decisions?

Katie:  They’ve had input on a few things but haven’t been super involved.

WCI: Is it worth it to go through this process to have a custom-designed home rather than one someone else designed or a spec house?

Katie:  I think we will really enjoy it when it’s all done and is built to suit our wants and tastes.   I just wasn’t quite prepared for all the work and time required.  I’m not a big shopper nor one to pay close attention to details in house designs so it is overwhelming at times.

WCI: What role has price played in any of these decisions?

Katie: Our contractor was very helpful in laying out reasonable budgets for each element based on the types of finishes he thought we would want so it gave us a good idea about what to expect costs to be. It’s interesting that most of the showrooms don’t show prices on the items.  They have you pick out what you like and then you get the pricing afterward.  Sometimes you go back to the drawing board to shave costs especially if you don’t feel strongly about one option over another.  In the end, we’re building what we want as we don’t want to do any more remodeling while we live in this house.

WCI: How would this process be different if your household income were still that of a typical physician?

Katie: We certainly wouldn’t be doing this scale of a project and would have done any changes in phases  — not all at once.   The reality is this project is mostly about wants but the house is paid for and we’ve set aside the cash to pay for the remodel.

There you have it, decision fatigue and its consequences. It’s a good thing we didn’t have to make all of these in one day and that no one put them all together in one place or we would have never begun this project! Tune in next time for more adventures from renovation land!

Have you experienced decision fatigue from new home construction or remodeling? How did you handle making decisions with your partner? Share your story below!